I try to cover some interesting, sciencey points on the conference in later posts, right now just a brief, subjective human- and strategy focused summary:

Congrats to Aubrey de Grey and the team, everything went well and if finally a worldwide consensus is around the corner claiming that robust healthy lifespan extension is technologically possible and worth achieving it is largely due to Aubrey’s relentless networking, organizing activity and American like pushy marketing strategy! Well done!

Had a nice chat with a diverse bunch of interesting people amongst others: Barbara Logan, Nason Schooler, Todd Huffman, Betty Liu, the startupper Andregg brothers, Mark Hamalainen, Keith Causey, Ben Zealley, Brian Martin and sure I forget to mention many more here.

The stem cell biology people  – Amy Wagers, Irina Conboy, Judith Campisi, Tomaso, Badylak, were unfortunately almost unavailable at all times except their talks, or maybe just I was in the wrong place although I planned to ask them some targeted questions. Same applies the oldie industry regenerative medicine veterans like Michael West or William Haseltine.

1 thing at the big public coalition for ending Aging event at UCLA: Aubrey de Grey (43) was the youngest presenter and my strategic advice for similar future events is to include life extension supporters from all chronological ages, for instance there is the smart Ending Aging coauthor and calorie restriction practitioner Michael Rae, who is quite young and capable of giving big speeches in front of a large audience. Just to let other angles and fresh voices in.

Also from a marketing point-of-view we had a nice chat the other day on the necessity of a mainstream life extension supporter Al Gore like celebrity who could be a good common sense contrapoint to Ray Kurzweil. Believe it or not, fundraising efforts largely depend on the faces and voices of robust life extension. (I suggested Leo DiCaprio or Robert Downey JR, who are acting lately in geeky type movies).

The FriendFeed Room experiment totally sucked, nobody used it except me at the beginning, so I gave it up quickly without interactivity. I haven’t advertised it too much and 1 thing is for sure: this kind of life extension crowd cannot be accused of being too geeky and early adopter -except some individuals – in their web habits even if you would think – as I do – that life extension is by default a perfect geek issue and the biggest lifehack ever.

Finally here is a bonus to the mysterious Reason (English, American, how old is he, what’s his profession, anyone knows?) soul of the oldest and most consequent niche life extension blog. 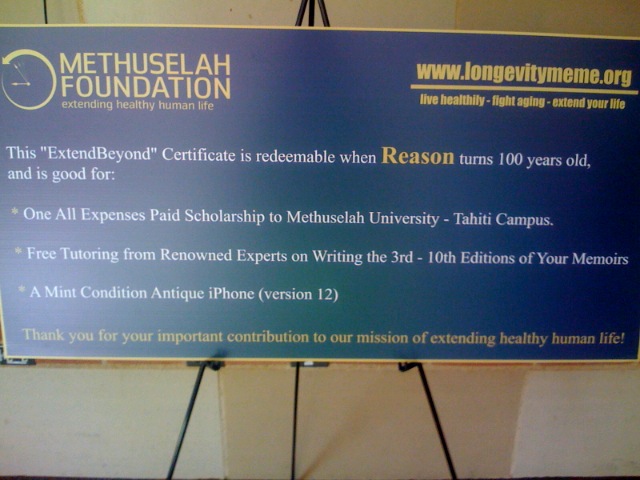