In the live thesis building blogxperiment I edit (digest, compile, write, rewrite, delete) my ongoing doctoral thesis in blog posts and put the parts together on thesis live. The title: The physiologic role of stem cells in tissues with different regenerative potential. 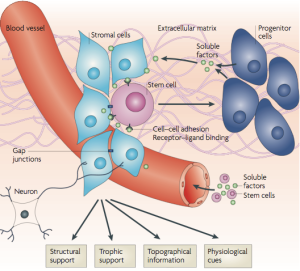 The concept of the stem cell niche was first proposed theoretically by Schofield exactly 30 years ago in the context of hematopoietic stem cells: “a hypothesis is proposed in which the stem cell is seen in association with other cells which determine its behaviour. It becomes essentially a fixed tissue cell. Its maturation is prevented and, as a result, its continued proliferation as a stem cell is assured. Its progeny, unless they can occupy a similar stem cell ‘niche’, are first generation colony-forming cells, which proliferate and mature to acquire a high probability of differentiation, i.e., they have an age-structure.”

Niches are restricted and specialized tissue microenvironments that integrate local and systemic signals for the regulation and maintenance for resident stem cells. The elements of the stem cell niche include the constraints of the architectural space, cellular components like stromal supporting and descendent/progenitor cells and acellular elements, like soluble and membrane bound molecules, paracrine and endocrine signals from local or distant sources and neural input [Figure by Jonas].

Niches are dynamic entities, could be redistributed and ideally “a candidate niche should be transiently depleted of its full complement of stem cells and then shown to take up and maintain a newly introduced stem cell” [Morrison, Spradling, 2008, thanks for Ouroboros for picking this review]
Jones DL, Wagers AJ. (2007) No place like home: anatomy and function of the stem cell niche. Nat Rev Mol Cell Biol. 2008 Jan;9(1):11-21. Review.
Morrison SJ, Spradling AC. (2008) Stem cells and niches: mechanisms that promote stem cell maintenance throughout life. Cell;132(4):598-611.