Have you ever asked any important but infrequently asked questions? Have you ever heard about the first personal genome service by the biotech startup 23andMe? Here is an inF.A.Q. addressed to this company:

According to the cool 23andMe genetics educator: 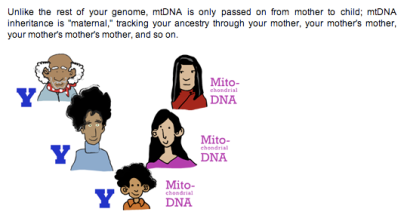 According to the peer review literature this is not necessarily the case and sometimes (rarely I admit) things in your cells can happen otherwise or more scientifically (mitochondrial recombination can occur): 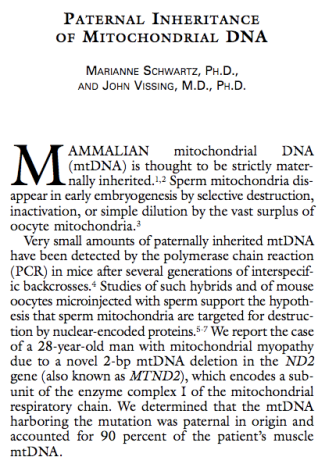 When 23andMe’s Maternal Ancestry Tree service is tracing the genetic path of their customers, the microarray employees are identifying their haplotypes based on the differences in the mitochondrial DNA. The company is using SNPs (single nucleotide variants) unusually both from genes in the compact mitochondrial coding region (around 15.5kb) as well as within the circa 1kb large hypervariable region to give a detailed ancestry assignment. 23andMe examines few thousand places (over 2000 says Mr. Bettinger) on the mitochondrial DNA out of the total 600,000 SNPs.

In the above case the 28 year old man’s blood and muscle differed at 18 positions which allowed assignment of the two sequences to separate European mtDNA haplogroups, H and U5, former being the same as the mother’s haplotype, while the haplotype of the patient’s muscle mtDNA was identical to that of his father’s and uncle’s blood. I wonder whether 23andMe’s Illumina chips can help make things clear in cases like this. (solution: let’s sequence the whole mito genome instead of a couple thousand basepairs). So as the first step in my mission to support the mission of 23andMe to support the mission of academic research I’d like to suggest putting a short tail on the possibility of paternally inherited mtDNA in the cool 23andMe genetics education material. Even if this could lead to the little confusion of some costumers, but otherwise will satisfy the experts. Chance is that the website of 23andMe will become a dominant tool of public genetics education in the future and that involves a growing responsibility on behalf of the editors there to give correct and detailed scientific information.

4 thoughts on “inF.A.Q. for 23andMe: what if I have mitochondrial DNA from Pa?”