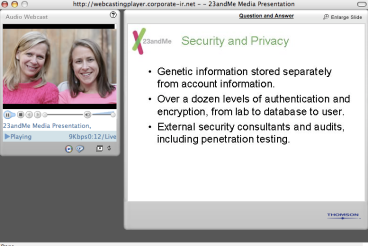 Wow, what an all web experience it was: Linda Avey and Anne Wojcicki co-founders presenting their slides on the just launched personal genome service of their company 23andMe, then answering questions. The whole webcast will be available later on their website.

Here is a very short account of their webcast based on my texting and ears: Of course, they are planning to launch a blog later, they are in close contact with F.D.A. people to get things right, the genetic data on the 23andMe are belonging to customers, Google Health connection: not any right now, but open to work with anybody to empower individuals’ advance research, consumers are parts of the research process via answering surveys (so this is not really user-generated content in a Wikipedian way).

Some of my questions were connected to 23andMe’s mission to support academic research, a mission I wanted to put to the test:

– Do they plan to launch PhD programs and setting up a wholly functional research lab? Answer: a little laugh after this question and Linda Avey said something like that “oh, no, maybe later, who knows?”.

– Do they plan to organise research conferences to support research? Answer: “It’s something that we have and plan.”

My third accepted question (with a terrible English) was (the unaccepted ones were of course more intertesting. 🙂

The answer was the usual “yeah, later”.

23andMe’s mission: connecting all people on the DNA level or social networking XY.0

Spit a big in a tube, search with Genome Explorer: the 23andMe way

23andMe: the early bird of web based biotech startups

Update: Berci Meskó of Scienceroll has also been a webwitness of the Webcast.