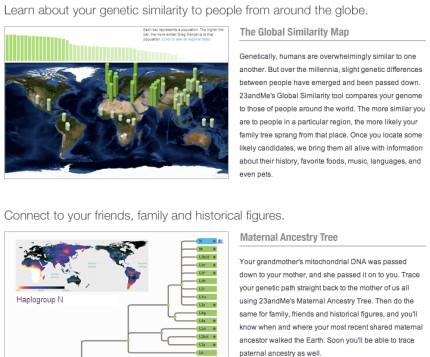 In these days, tech companies with MISSIONS are flourishing. I guess you’ve already heard about the company, whose mission is to organize the world’s information and make it universally accessible and useful. The newly launched, Mountain View based 23andMe seems similar in the mission respect. 23andMe is the first (already successful) and web (or rather Google) – based biotech company offering personalized genome service to its customers including interpreted and highly probabilistic information on the health risks of the customer’s genetic profile. But 23andMe has much more to offer in these early days and I think that mainly the biggest mission behind the company will be to show how different people are irreversibly connected and similar through their genetic material and variants. The company’s Global Similarity Map based on the comparison of the evaluated SNP (single nucleotide polymorphism) variants amongst customers and the Ancestry Service based on the by and large maternally inherited mitochondrial DNA. They will make this mission more explicit by introducing a social networking service around shared genotypes or as it claimed in the Wired article on 23andMe:
This is also where a novel use of social-networking tools comes in. Wojcicki envisions groups of customers coming together around shared genotypes and SNPs, comparing notes about their conditions or backgrounds and identifying areas for further scientific research on their own. “It’s a great way for individuals to be involved in the research world,” Wojcicki says. “You’ll have a profile, and something almost like a ribbon marking participation in these different research papers. It’ll be like, How many Nature articles have you been part of?'” (Social networking will be included in version 2.0 in a matter of months, Avey says.)

11 thoughts on “23andMe’s mission: connecting all people on the DNA level or social networking XY.0”